Live 8 was a huge campaign in the cause of the world’s poorest people for complete debt cancellation, aid improvement and trade justice. The main event was held on 2nd July 2005 in London, Edinburgh, Philadelphia, Berlin, Paris and Rome to unite this cause with one voice.

The Red Nose Day 2005 campaign platform, part developed by Can Factory, was used as a basis on which to develop the Live 8 application. The capture of petitions was developed via a Java web front end. However, this would not provide the capacity that we required. In order to tackle this problem it was decided to create the application in a distributable form. The next step was to find a partner that could act as a buffer for the massive amount of concurrent petition sign-ups. This was found in Akamai who created a global platform that captured sign-ups and distributed them to the main Java application.

After the successful development of the main Live 8 application the web site went on to have additional features developed by Can Factory.

User related functionality is handled by the Can Factory Scarab system.

Using these core system tools built with Java, it was possible to create a working application within the short timescales required.

Can Factory provided regular support and additional development and amendments since the Live 8 site went live in July 2005.

As well as this an administration system was developed allowing Comic Relief to administer and view statistics of the site.

This administration system was in the form of a web site and provided the following functionality: 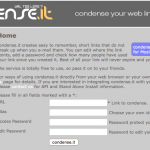