Read the rest of our esports series:

There are 3 main competitors in video game streaming. The triumvirate vying for the valuable resources of viewers and time spent watching, the two metrics that they can sell to sponsors. They differentiate from each other through their video players, chat boxes, and unique content. Twitch is certainly the biggest of the three, using their first-mover advantage to secure favourable streaming contracts with Event organisers and leagues. It was acquired by Amazon in August 2014 for $970 million. [5] Youtube Gaming is the 2nd biggest, signing lots of exclusivity deals to carve their way into the market. Youtube is owned by Alphabet Inc., sharing the same parent company as Google.

Facebook is a recent challenger, also taking the route of signing exclusivity deals with popular existing leagues. Facebook.gg was recently launched, to give creators on Facebook a platform to show their content. [6]

Twitch remains the biggest entity in this space, despite their new challengers. Youtube Gaming is growing at a faster rate, [7] but it is still not near Twitch’s standing in the video game streaming space. All 3 of these streaming services are owned by some of the world’s biggest companies, it will be interesting to see if Youtube or Facebook are able to challenge Twitch’s domination of this sector. 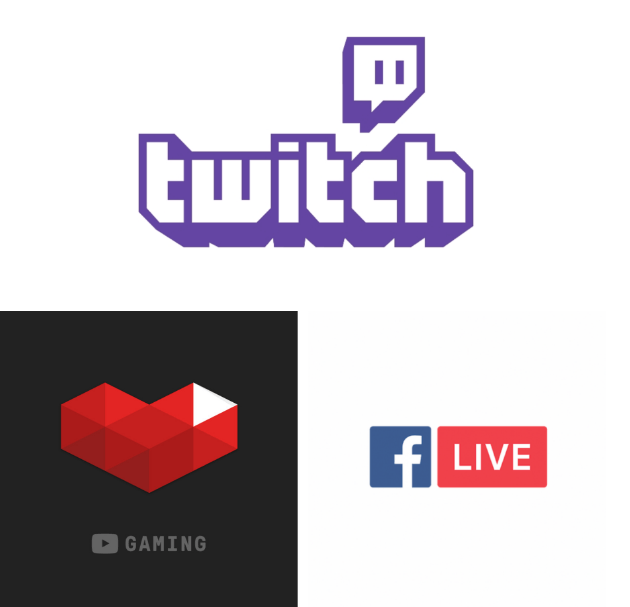 The figures from Statista in the graph below show that there are an estimated 165 million people regularly viewing esports in 2018, with another 215 million occasional viewers. 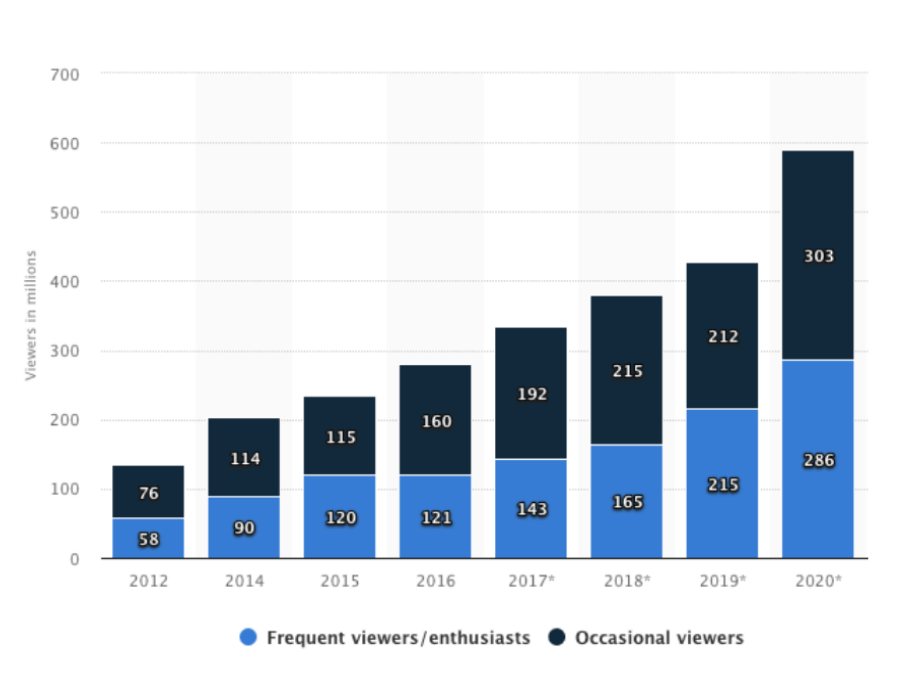 Newzoo predicted even higher, at 385 million viewers, with half of these people not even playing the game. [11] Viewing numbers for some games are higher than their monthly unique players. For a developer making a new game, one thing to be taken in to consideration is whether or not the average person has the hardware capable of playing your game. In the West, people do now as PC prices have fallen. This isn’t as true in other regions; but with around half of viewers not even playing the games, it becomes less of an obstacle to a game becoming a popular esport.

The second graph, below, shows the spread of viewers globally, with Asia Pacific far in the lead. This is skewed somewhat, as the vast majority of these viewers are from China, a historically hard market to break in to due to government regulation, corruption and infrastructure issues.

What does it take to become a professional esports player?

To an outside observer with no knowledge of esports, it might seem puzzling that people are earning money playing video games. Some of these players have a large social media presence, being paid healthy wages, money from sponsorships as well as prize money. There are a number of things that separate these esports professionals from casual gamers.

Raw skill – Debatably the most important item on this list. If you’re not good at the game, you’ll most likely have no real future as an esports player. That isn’t to say you won’t find your space as an analyst, observer, or in some other capacity within an esports team.

Practice – Players have been quoted as saying that they practice anywhere between 6-14 hours per day. [13] In top teams, this isn’t as simple as pressing play. Practice can often be highly structured and involve practicing or ‘scrimming’ against other top players and teams.

Mental Fortitude – Given the seemingly infinitesimal scenarios that can occur during some of these video games, it goes without saying that a player might not always achieve their intended outcome in game. On a bad streak of losses, player ‘tilt’ is a common issue. This is akin to an emotional breakdown, whereby a player becomes so frustrated at results, that they begin to play sub-optimally. It is in these moments that having a robust temperament can be the difference between winning and losing.

Motivation – Doing the same thing over and over everyday, can get very tedious, especially seeing as some games are repetitive in and of themselves. Burnout is a real issue. A player must be able to motivate themselves, to carry on grinding even though it can seem mundane at times.

Hardware – A bad workman blames his tools, sure, but in the case of esports, this can sometimes be the case. Games developers constantly walk the tightrope of making a game look good, vs. making it suitable for different levels of hardware. Certain games require a computer with both a high end processor (CPU) and graphics card (GPU), which can cost gamers dearly. This also becomes an issue at smaller esports tournaments, as organisers are under pressure to supply high quality hardware and peripherals, which can be difficult without large sponsors.

Being part of the community – So you’re hitting every shot and winning every game you play? So is the next esports hopeful. Now you need to get noticed. Joining amateur online leagues, forming a team and attending LAN events are all ways of getting yourself noticed in the saturated world of esports.

Part 3 shall be uploaded tomorrow morning…

9. DAVID MACK, ‘3 surprising facts about the gaming industry and why you should start paying attention’, World Economic Forum, 13 June 2017. https://www.weforum.org/agenda/2017/06/3-surprising-facts-about-the-gaming-industry-and-why-you-should-start-paying-attention/

10. STATISTA, ‘eSports audience size worldwide from 2012 to 2021, by type of viewers (in millions)’. https://www.statista.com/statistics/490480/global-esports-audience-size-viewer-type/

12. STATISTA, ‘Distribution of eSports frequent viewers and enthusiasts worldwide in 2017, by region’. https://www.statista.com/statistics/673740/share-of-esports-viewers-by-region-worldwide/

13. GRAHAM ASHTON, ‘What is the Optimum Training Time for Esports Players?’ The Esports Observer, December 28 2017. https://esportsobserver.com/optimum-player-training-time/

esports, Gaming
Recommended Posts
Pages
Recent Posts
SEARCH
Having trouble finding what you're looking for?
© 2022 CAN FACTORY. ALL RIGHTS RESERVED.