Read the rest of our esports series:

What’s at stake here? Why are people dedicating their teenage years and early twenties to video games? This first image shows the prize pool for DOTA 2’s TI 2018, A.K.A The International. 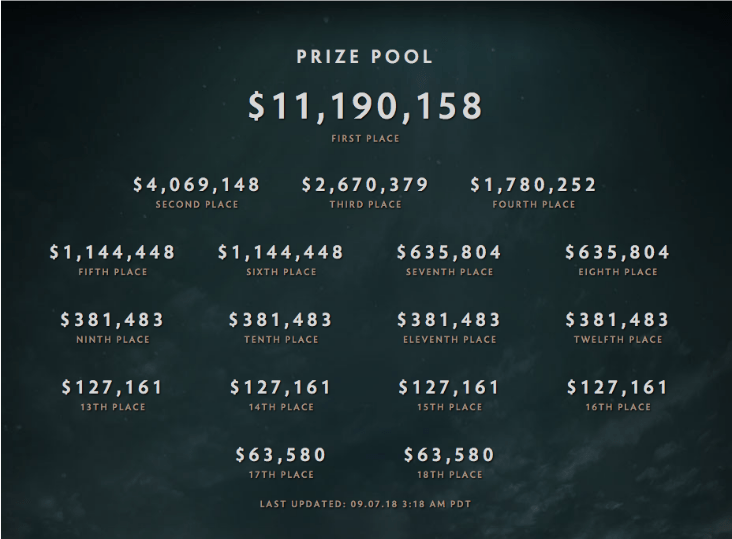 That top number might shock some readers. Objectively a vast amount of money for a prize pool, but that’s just for first place. The total prize pool for this week long tournament was 25.5 million dollars.The total amount paid in prizes for DOTA 2 sits at nearly $170 million dollars, in a game that is only 5 years old. The $25.5 million prize pool is of course an exception, as it is funded by Valve, the games developer, by giving a quarter of all profits from an in game item, called the Battle Pass, towards the prize pool.

Valve puts an initial $1.6 million in to the prize pool, then the rest comes from sales of the Battle Pass. So 24 of that 25.5 million dollars, comes from gamers paying for in game accessories and loot, and even then, it’s only a quarter of what people spent in game during the 3 month period leading up to this tournament. 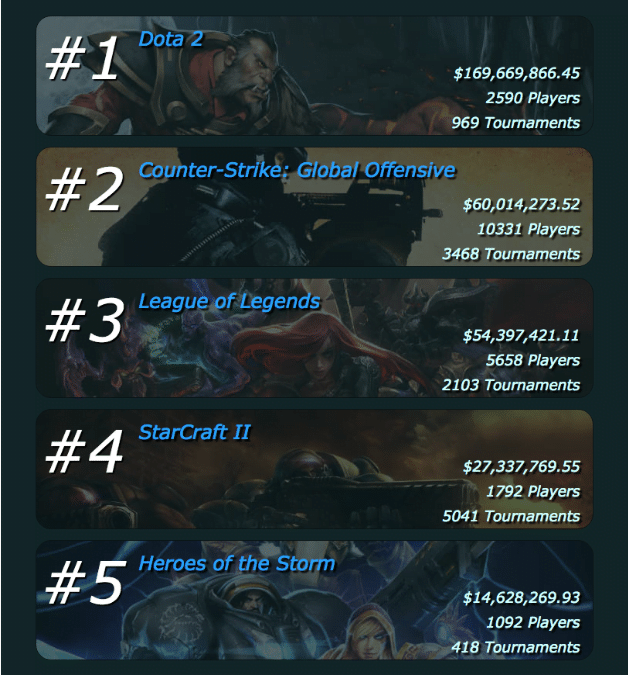 Your average prize pool for a tier 1 or 2 event in these major games will range from $250,000 to $1 million. Epic Games, the developer behind Fortnite, recently made headlines by pledging $100 million dollars towards prize pools for the first year of Fortnite esports tournaments. [16] Pledges like this make the headlines, but that shouldn’t mislead you into thinking that all esports titles are like this, it varies from game to game.

For example, Rocket League, a popular game but by no means a top esport, has had 8 tournaments with prize pools above $100,000. Counter Strike:Global Offensive, on the other hand, has had over 125 tournaments with prize pools over $100,000. [17] This comparison isn’t entirely fair, as the latter is a lot older and more popular than the former, but hopefully it can give you an idea of the different ranges of prize pools.

That’s a lot of money, where is it coming from?! Traditionally, the money in esports came from endemic sponsors, such as Nvidia, Logitech and Intel. Securing non-endemics was initially a big hurdle for Event organisers and developers. The bigger brands and non-endemic sponsors have started flooding the market recently.

You might ask why is Audi sponsoring an esports team? They make cars?

This has traditionally been a hard market to target for advertisers, and has led to non-endemic sponsors entering the market. 61% of viewers over 18 were earning in excess of $50000 a year, [19] demonstrating that it is not only boys in their mid teens watching esports, as some stereotypes would have you believe.

Events tend to be longer, with viewers watching from start to finish. Instead of paying to sponsor a 90 minute football game with ad breaks before, during and after, a sponsor can get anywhere between a couple of hours to a couple of weeks of coverage, with their name emblazoned on all parts of an event.

Data analytics company Nielsen predicts that the average esports fan in the USA follows 5.7 games, which gives sponsors multiple avenues to pursue when it comes to building presence within the market. [20] Advertisers can sponsor a seemingly endless amount of things, from teams, players, events, segments in the show, mouse mats, computer screens, chairs; even a device called a mouse ‘bungee’ that holds the excess cord of your wired mouse.

One of the huge pulls for advertisers is that esports fans have been shown to be brand loyal. If they buy a gaming peripheral or accessory from a particular brand, they are likely to buy other products made by the same brand. [21]

A survey carried out by Foley and Lardner of people working in the esports industry found that most respondents thought Advertising and Sponsorship will provide the most revenue growth over the coming year. [22]

The sponsors listed above and their involvement in esports:

Airbus – Out of the Blue team (League Of Legends).

Vodafone – has previously sponsored G2 Esports, an organisation based in Germany. Vodafone has also recently partnered with ESL, the biggest esports tournament organiser.

Logitech – Partnered with popular teams such as Cloud 9 and G2 Esports.

NeedForSeat – Partnered with multiple top leagues and teams such as Dreamhack and Team Liquid.

IEM (Intel Extreme Masters) – In 2006, Intel partnered with ESL to form IEM, which is now the longest running esports tournament. Tournaments have been held in across the globe in places as diverse as Katowice in Poland, Guangzhou in China and Sydney, Australia.

Check back for Part 4 tomorrow…

18.  EOIN BATHURST, ‘The Average Age of Esports Viewers is Higher than You May Think, says GameScape from Interpret, LLC’, The Esports Observer, February 24 2017. https://esportsobserver.com/average-age-esports-viewers-gamescape/

esports, Gaming
Recommended Posts
Pages
Recent Posts
SEARCH
Having trouble finding what you're looking for?
© 2022 CAN FACTORY. ALL RIGHTS RESERVED.